DGIST scientists have found a novel way to control magnetic spins in a localized space.

Scientists in Korea have found a new way to control the alignment state of magnetic atoms in an antiferromagnetic material, showing promise for the development of tiny sensors and memory devices. Researchers at the Daegu Gyeongbuk Institute of Science and Technology (DGIST) describe their new approach featuring a controllable exchange bias effect, which enables the asymmetric magnetic actions of devices comprised of complex combination structure of different types of magnetic materials, in the journal Acta Materialia.

Spintronics is an emerging technology for manufacturing electronic devices that take advantage of electron spin and its associated magnetic properties, instead of using the electrical charge of an electron, to carry information. Antiferromagnetic materials are attracting attention in spintronics, with the expectation of spin operations with higher stability. Unlike ferromagnetic materials, in which atoms align along the same direction like in the typical refrigerator magnets, magnetic atoms inside antiferromagnets have antiparallel spin alignments that cancel out the net magnetization.

Scientists have worked on controlling the alignment of magnetic atoms within antiferromagnetic materials to create magnetic switches. Conventionally, this has been done using a ‘field-cooling’ procedure, which heats and then cools a magnetic system containing an antiferromagnet, while applying an external magnetic field. However, this process is inefficient for use in many micro- or nano- structured spintronics devices because the spatial resolution of the process itself is not high enough to be applied in a micro- or nano-scale devices.

“We discovered that we can control the antiferromagnetic state by simultaneously applying mechanical vibration and a magnetic field,” says Jung-Il Hong of DGIST’s Spin Nanotech Laboratory. “The process can replace the conventional heating and cooling approach, which is both inconvenient and harmful to the magnetic material. We hope our new procedure will facilitate the integration of antiferromagnetic materials into spintronics-based micro- and nano-devices.” 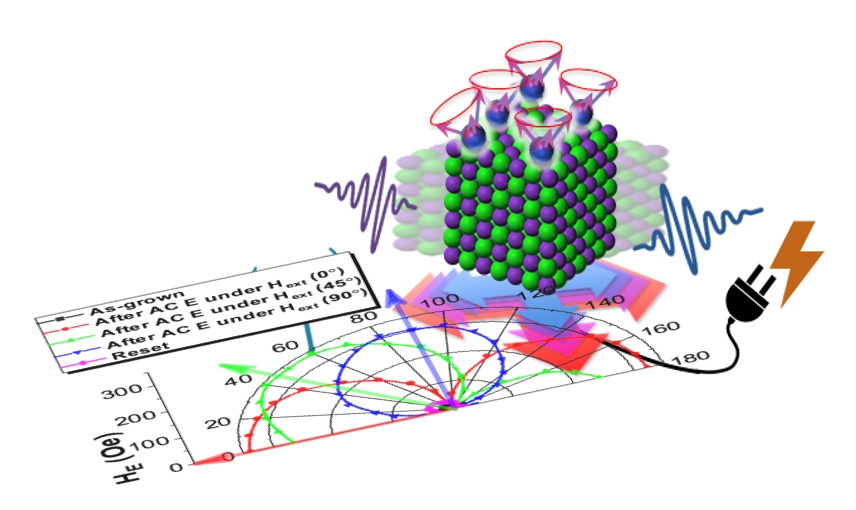 With the PMN-PZT/Ta(4 nm)/Pt(3 nm)/IrMn(15 nm)/CoFeB(5 nm)/Ta(4 nm) structure, (a) the exchange bias can be set reversibly along two opposite directions after applying ac E with opposite directions of Hext of 5000 Oe, (b) Successive and stable HE reversal has been demonstrated. (c) Illustration for realignment of AFM spin axes in various direction by the field-vibration procedure. (d) HE-φ curve, and (e) HE-φ polar graph before and after resetting unidirectional exchange anisotropy in various direction using the field-vibration procedure.

Hong and his colleagues combined two layers: a cobalt-iron-boron ferromagnetic film on top of an iridium manganese antiferromagnetic film. The layers were grown on piezoelectric ceramic substrates. Combined application of mechanical vibration and a magnetic field allowed the scientists to control the alignments of magnetic spins repeatedly along any direction desired.