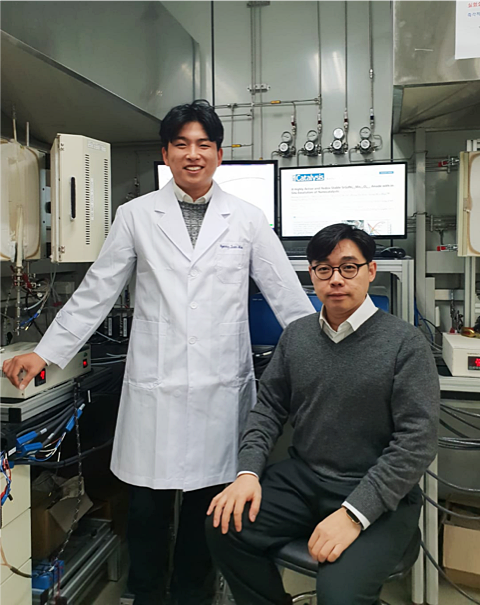 A research team led by Professor Kang Taek Lee in the Department of Energy Science and Engineering developed electrode material for a new form of high-performance Solid Oxide Fuel Cell (SOFC). Since SOFC, which generates electricity by reacting hydrogen (fuel) with oxygen in the air, emits only water after reaction, is ecofriendly, and has little restrictions in installation place, it is drawing limelight as a new and renewable energy technology that is appropriate for distributed generation . However, it has been difficult to obtain stable supply due to the rapid performance decline of electrode generating power amidst sudden stop and the suspension of fuel supply.

Professor Lee’s team developed a new electrode material designed in a double perovskite structure to solve the stability of SOFC electrode. Inside the electrode material is planted with nickel (Ni), a catalyst which increases the oxidation reaction efficiency of hydrogen. Once the fuel cell operates, nickel voluntarily transfers outside the electrode surface, generating exsolution’  which forms nano metal catalyst. The exsoluted nickel catalyst helps the high-efficient oxidation reaction of fuel cell, improving the stability and performance of fuel cell at the same time.

While exsolution has recently been researched among many scientists, most research has been focusing on temporary improvement of performance in the formation of metal nano catalyst and the catalyst’s oxidation reaction. In contrast, Professor Kang Taek Lee’s team focused on researching and developing a fuel cell electrode to have a stable oxidation reaction in oxidation-Redox Cycle, improving SOFC performance and advancing its technological commercialization.

Also, the research by Professor Lee’s team is expected to open a new horizon for developing a new material electrode that guarantees high-performance and high-durability by proving the structural changes of reversible surface for the exsolution of nickel nano metal catalyst based on fuel cell supply. Professor Kang Taek Lee in the Department of Energy Science and Engineering said “While the electrode of existing SOFC has excellent performance, its performance declined rapidly when the hydrogen supply became unstable, which was difficult to recover the original performance. The development of electrode that brought high performance and improved the stability of oxidation-Redox Cycle will lead the commercialization of SOFC, through the control of voluntary nano metal catalyst exsolution.”