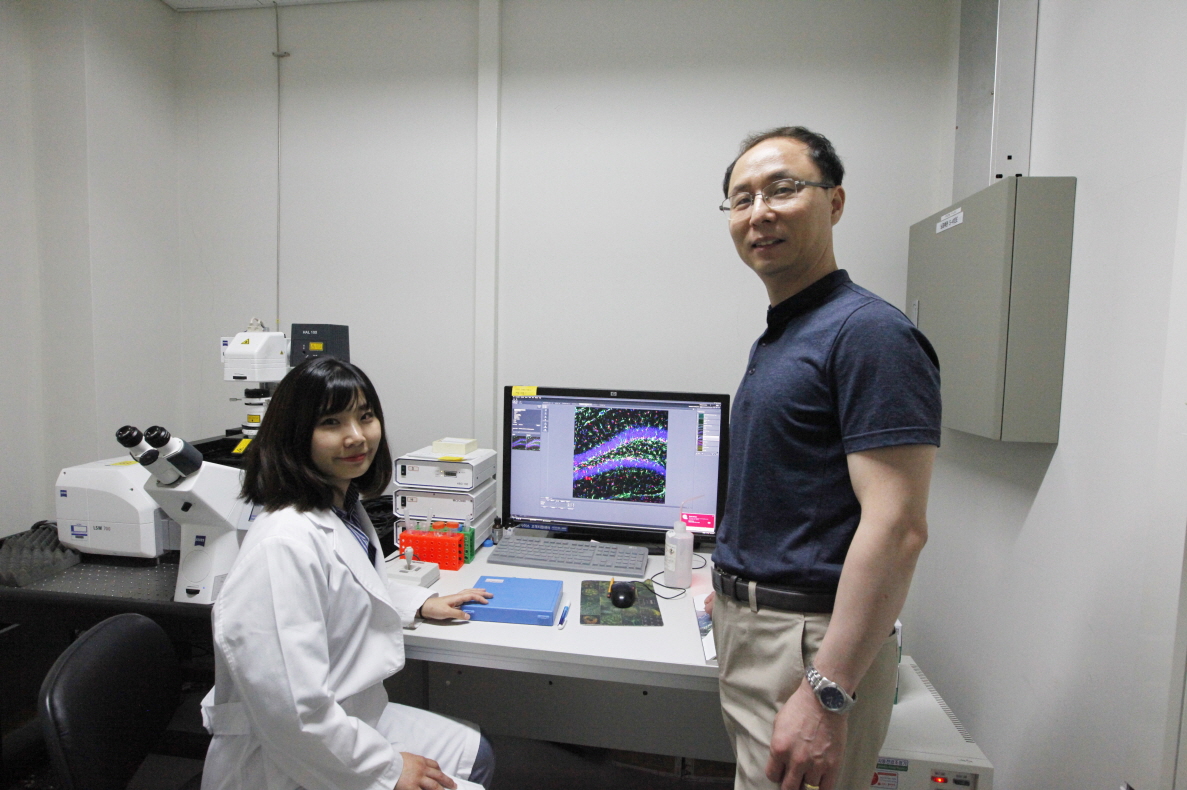 Chronic stress is infamous for its association with various mental diseases such as depression and schizophrenia that have become very serious social problems. Stress can even raise the risk of neurodegenerative diseases, such as Alzheimer’s disease. However, the exact mechanisms underlying damages of brain functions  have not been well known yet. While the previous animal studies found that generation of new neurons is much less in stressed mice, apoptosis1, a well-known cell suicide pathway was not found in NSCs, leading to a conclusion that cell death is not related with loss of NSCs during stress. Thus, the cause of decline in adult neurogenesis2, which is generation of new neural cells  in the adult brain, specially in hippocampus, has remained .

Professor Yu’s team discovered for the first time that chronic stress causes autophagic death of adult hippocampal NSCs. Autophagy (self-eating in Greek) is a cellular process to protect cells from unfavorable conditions through digestion and recycling of inner cell materials, thereby cells can remove toxic or old intracellular components and get nutrients and metabolites for survival. However, autophagy can turn into self-destruction process under certain conditions, leading to autophagic cell death. Autophagic cell death is a form of cell death distinguished from apoptosis by the causative role of autophagy for cell demise. Using the NSCs derived from rodents and genetically-modified mice, the research team discovered that the death of hippocampal NSCs is prevented and normal brain functions are maintained without stress symptoms when Atg7, one of the major autophagic genes, is deleted.

The research team also further examined the mechanism controlling the autophagy induction of NSCs in more depth, proving that SGK3 (serum/glucocorticoid regulated kinase3) geneis the trigger for autophagy initiation. Therefore, when SGK3 gene is removed, hippocampal NSCs do not undergo cell death and are spared from stress.

Professor Yu in the Department of Brain and Cognitive Sciences said that “It is clear from our study that cognitive defects and mood disorders brought about by stress is through autophagic death of adult hippocampal NSCs. With continuous research, we’ll be able to take a step further toward the development of effective treatment of psychological disorders such as depression and anxiety. Furthermore, stress-related neurodegenerative diseases including dementia could be also benefited from our study. We hope to be able to develop much faster and more effective mental disease treatments through joint research with the Chinese National Compound Library to develop SGK3 inhibitor together.”

This research achievement was published in the journal  ‘Autophagy’ on June 24 and was participated by Seonghee Jung in the M.S.-Ph.D. Integrated Program in the Department of Brain and Cognitive Sciences at DGIST as the first author. It was conducted through the Brain Research Program and Mid-level Researcher Support Program by the Ministry of Science and ICT and the Korean National Research Foundation, as well as DGIST Convergence Research Project on Neuroplasticity Rehabilitation Mechanism and Technique.

1  Apoptosis: A physiological suicide mechanism needed to control the number of cells and for normal rotation of tissues
2  Adult neurogenesis: Generated from the hippocampal neural stem cells that are responsible for memory, learning, and emotional control is deeply related to degenerative brain diseases and neurodevelopmental disorder.