Prof. Sung Bae Lee, DGIST and his research team have newly identified a key regulatory mechanism that controls the movement of TDP-43 protein into neurons, which contributes to the development of various degenerative brain diseases such as Lou Gehrig's disease and frontotemporal dementia. The research, which is conducted in collaboration with the research team of Prof. Dae Hee Hwang from Sciences at Seoul National University, is expected to open up the possibility of developing effective treatments specifically targeting the early stages of Lou Gehrig's disease(ALS) and frontotemporal dementia(FTD).

A treatment based on the exact pathologic mechanism of amyotrophic lateral sclerosis, called "Lou Gehrig's disease," has not yet been completely identified or developed. Besides the specific damage to motor neurons, a representative pathologic feature of Lou Gehrig's disease is a phenomenon in which the TDP-43 protein, which is mainly present in the nucleus of motor neurons, moves into the cytoplasm and accumulates abnormally depending on the condition. This is also found in patients with other degenerative brain diseases such as FTD, Alzheimer's disease, Huntington's disease, and Parkinson's disease.

The joint research team of Prof. Sung Bae Lee and Prof. Dae Hee Hwang conducted a study on a physiological program regulating the movement of TDP-43 protein between the nucleus and cytoplasm in nerve cells. As a result, the intracellular calcium-calpain-importin signaling system was involved, and the intracellular location of the TDP-43 protein changed between the cytoplasm and nucleus when the cellular environment changed under normal conditions. 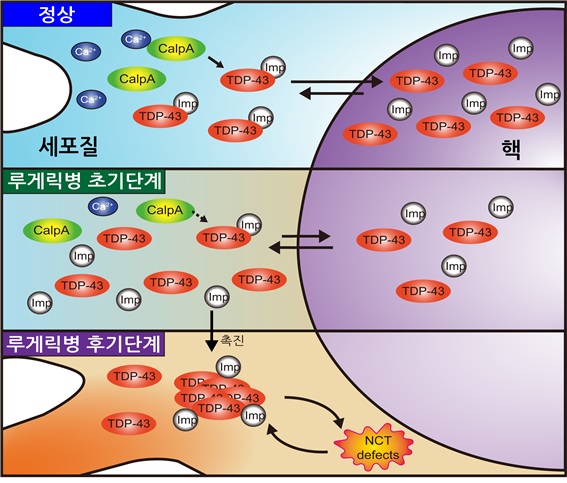 In particular, the study revealed that the motility of the ALS animal model could be significantly restored depending on the progress of the disease, by properly controlling the intracellular “calcium-calpain-importin signaling system”. Therefore, the joint research team proposed a new treatment strategy that the TDP-43 protein could preemptively control its own movement in the early stages of the disease before developing toxicity due to abnormal aggregation in the cytoplasm of nerve cells, thereby suppressing the pathology of degenerative brain diseases.

“This study has identified an intrinsic program of the cells that controls the intracellular migration of TDP-43, a representative protein that causes degenerative brain disease” said Prof. Lee. “It is expected to enable the development of therapeutic agents for various degenerative brain diseases involving the TDP-43 protein, such as Lou Gehrig's disease, based on a new strategy in the future.”

The research was conducted in collaboration with the research team of Seoul National University Prof. Dae Hee Hwang. Jeong Hyang Park and Dr. Chang Geon Chung from DGIST also participated as co-investigators. The results of the study were published in ‘eLife’ on December 11, and was conducted as a Basic Research Laboratory (BRL) support project with a grant from the Ministry of Science and ICT, and with the support of the National Research Foundation of Korea.