New study shows that uneven accumulation of amyloid β is linked to olfactory dysfunction or partial loss of smell, an early symptom of Alzheimer’s disease

Olfactory dysfunction or partial loss of smell is one of the earliest symptoms of Alzheimer’s disease (AD). While accumulation of the toxic amyloid β protein in the brain is known to drive AD progression, its involvement with olfactory sensory neurons is poorly understood. Researchers have now dug deeper into the molecular mechanisms underlying olfactory dysfunction by assessing behavioral, physiological, and anatomical changes in a mouse model of AD. These findings could help reveal therapeutic targets for AD. 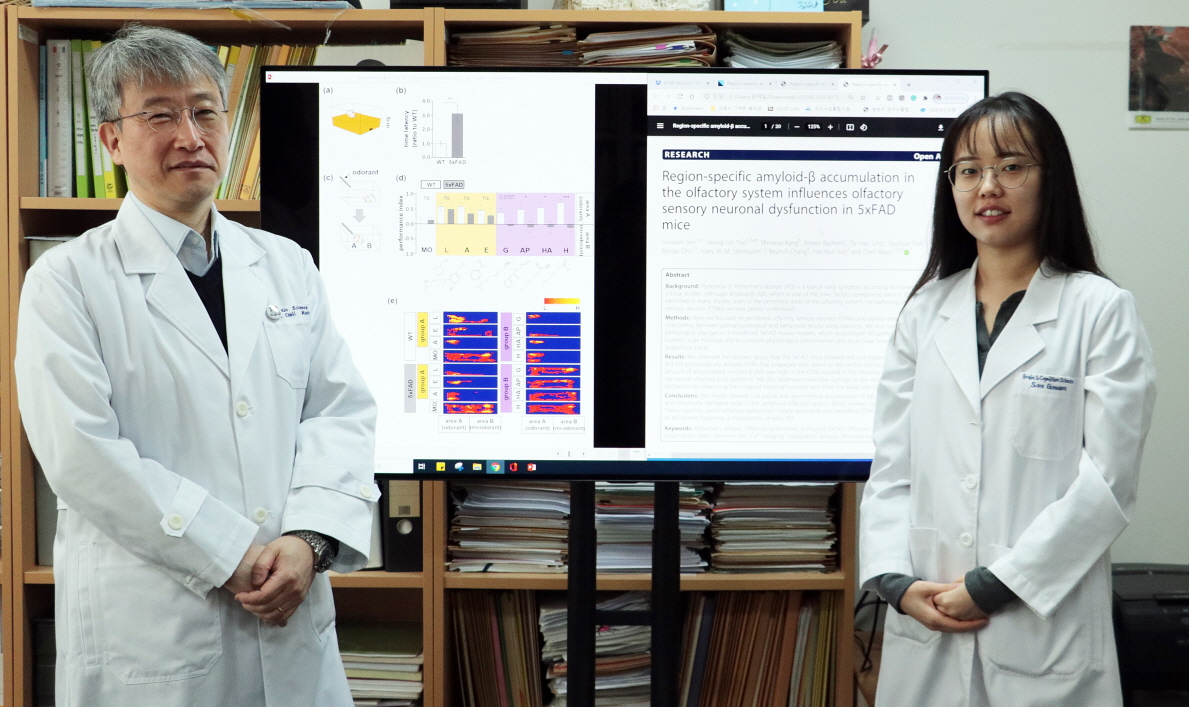 Loss of smell or olfactory dysfunction is an early indication of the neurodegenerative Alzheimer’s disease (AD) and appears in approximately 90% of all patients. While loss of smell is a major symptom, patients with AD are only unable to recognize specific odors and do not completely lose their sense of smell; this suggests a possible region-specific involvement of the olfactive center in the brain. Amyloid β (Aβ), a toxic protein that accumulates in the brain is a known contributing factor in AD pathogenesis and is also present in the olfactory system that controls the sense of smell. However, the pathology and mechanisms of AD-specific olfactory dysfunction involving olfactory sensory neurons (OSNs) remain unclear.

To address this gap, a group of researchers from DGIST, Korea, led by Professor Cheil Moon, probed deeper to understand the neuronal mechanisms underlying olfactory dysfunction in AD.  Talking about their latest study, which was recently published in Alzheimer’s Research and Therapy, Prof. Moon states, “We have been particularly interested in the region-specific degeneration of sensory neurons in the olfactory system during AD progression. In our new study, we investigate the association between physiology and olfactory behavior using an AD mouse model to understand the involvement of olfactory neurons in disease pathogenesis”

In this study, the researchers used a mutant mouse model expressing high levels of Aβ and exhibiting nervous system deficits that simulate AD pathology. They tested whether the mice were able to locate hidden food based on smell and where they could identify and differentiate various odors. They found that the mice required a much longer time to seek food and exhibited partial olfactory dysfunction. They further confirmed this physiologically by using a calcium-based sensor: they found that the mice were receptive to certain odors but could not identify others owing to neuronal deficits in specific areas of the olfactory system.

Interestingly, when they dug deeper, they found that the Aβ protein was unevenly distributed across different anatomical regions of the olfactory system. Furthermore, the regions that expressed higher levels of Aβ were, in fact, those regions that exhibited lower activation of OSNs and lower odor detection. This highlights the role of region-specific Aβ accumulation in olfactory dysfunction.

In addition, the researchers also identified anatomical defects and a lower neuron turnover indicative of lesser proliferation and higher neuron death rate in specific olfactory regions including the olfactory epithelium and bulb that likely contribute to the loss of smell.

Prof. Moon concludes by stating the long-term implications of their work. He remarks, “Partial loss of smell can be a potential diagnostic strategy for the early screening of persons at risk of developing AD. The findings of our study enhance the understanding of the association between AD progression and Aβ accumulation in the olfactory system that can further reveal interesting therapeutic targets.”