Combining two magnetic effects can manipulate the magnetic behaviours of a device, offering a novel opportunity for the next generation IT technologies. 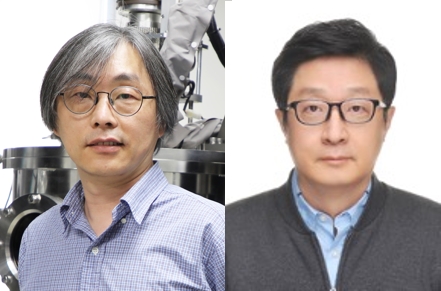 A novel route to tune and control the magnetic domain wall motions employing combinations of useful magnetic effects inside very thin film materials, has been demonstrated by researchers from Daegu Gyeongbuk Institute of Science and Technology (DGIST) in Korea. The research, published in the journal Advance Science, offers a new insights into spintronics and a step towards new ultrafast, ultrasmall, and power-efficient IT devices.

Spintronics is a branch of electronics that utilize the direction of an electron’s spin instead of its electrical charge. Combining spin with electron’s charge – already exploited in conventional electronic systems – offers more powerful and diverse ways to code and decode data. Researchers think spintronics could be used to develop so-called “racetrack memory” for example, with the stored information pushed along a thin wire at high speed.

The new study demonstrates a new way to handle the information processing using the movement of magnetic state of the thin film device. It takes advantage of some unusual effects that occur when materials with contrasting types of magnetic material are squashed together.

Much research in spintronics focuses on the narrow region where two such contrasting magnetic materials meet, and how this “domain” and “domain wall” can propagate. An external electric current, for example, can shift the magnetic domain, although this process is hard to control and does not offer a precise enough movement as yet that scientists seek.

Jung-Il Hong of the Department of Emerging Materials Science at DGIST, and his colleagues take advantage of another ‘effective’ magnetic field that was already present in the system combining the DMI and exchange bias effects. Spins line up in different ways in response to the magnetic field and electrical currents in the magnetic structure, and the behaviour of magnetic domains could also be controlled due to those combined magnetic effects.

They also demonstrate that the direction of the exchange bias field can be reconfigured by simply injecting spin currents through the device, enabling electrical and programmable operations of the device.

Jung-Il Hong says: “In order for spintronics devices to go from theory to reality, the behaviors of magnetic domains and the domain wall interfaces that separate them need to be understood properly in multi-layered materials. Our work takes a step towards a finer operation of domain manipulation in the device structure that we believe could easily be integrated in logic devices.” 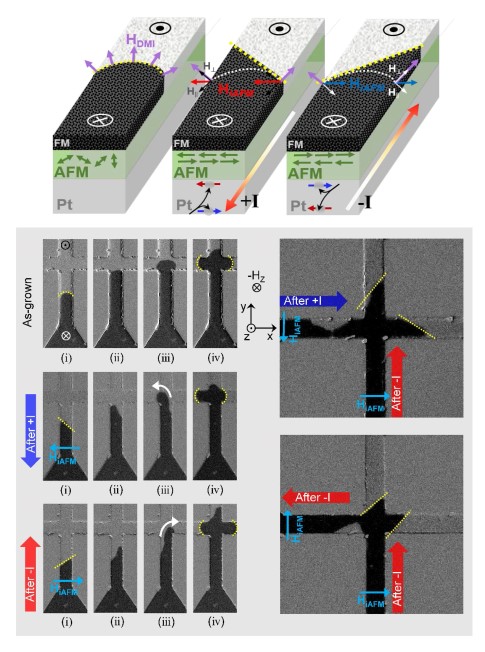 In the crossbar-patterned sample, various behaviors of perpendicualr field driven down-up DW motions without HX can be generated dependening on the configuration of AFM spins. DW propagations were measured in a) as-grown state with randomly distributed AFM domains, and after current injections of b) positive and c) negative currents along the vertical direction (y-axis), respectively. DW motions in the horizontal branch after injection of d) positive current and e) negative current along x-axis were also measured.