- Proposes a universal and easy method that can be applied to various photoelectric devices using organic charge transport layers, including solar cells

On the 11th (Wednesday), DGIST announced that the research team led by Professor Choi Jong-min of the Department of Energy Engineering at DGIST (President: Kuk Yang) enhanced light absorption capacities and photocurrent generation of solar cells by implementing a nano-structured electrode on the back of the perovskite quantum dot solar cell, which is in the limelight as a next-generation solar cell. In addition, the team has systematically verified the correlation between the shape of the nanostructure and the efficiency of the solar cell and the optimized conditions for the formation of nanopatterns in organic materials. It is expected that the team’s achievements can be applied to various photoelectric devices using organic materials. 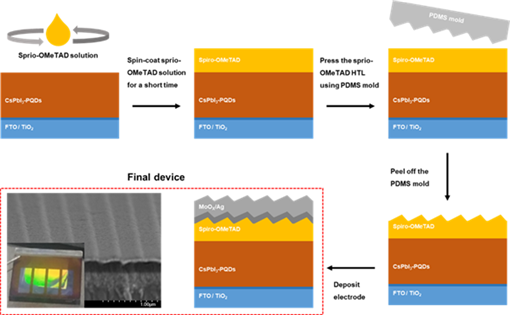 The efficiency of a solar cell is mainly determined by its ability to absorb light and transmit electric charges generated by light to the electrode. Although perovskite quantum dots have excellent photoelectric properties, they have limitations in generating photocurrent as they do not form a thick light absorption layer when manufacturing a solar cell.

Meanwhile, the research team led by Professor Choi Jong-min of the Department of Energy Engineering at DGIST succeeded in enhancing light absorption and photocurrent while maintaining the thickness that optimizes the amount of charge extraction by forming the rear electrode of the perovskite quantum dot solar cell into a nanostructure. The research team successfully embodied a rear nanostructure electrode by forming a nanopattern on the hole transport layer of a perovskite quantum dot solar cell through a nanoimprint lithography and uniformly depositing an electrode material on top of it along the curves of the hole transport layer nanopattern.

In addition, the team verified the optimal conditions for nanoimprint lithography based on the relationship between the glass transition temperature and flexibility of organic materials, which are widely used as charge transfer materials for photoelectric devicess including solar cells. These achievements are expected to contribute to research on the formation of nanopatterns of various photoelectric devices using organic materials as charge transport layers in the future.

Meanwhile, this research is the result of a joint research conducted with Professor Kim Yeong-hoon's team at Kookmin University and Professor Baek Se-woong's team at Korea University and was led by Han Sang-hoon, a Combined Master/Ph.D. student at DGIST. In addition, this study was funded by the National Research Foundation of Korea, the DGIST R&D Program, and new research project subsidy provided by the National Research Foundation of Korea.

Associated Links Research Paper on Journal of Materials Chemistry A