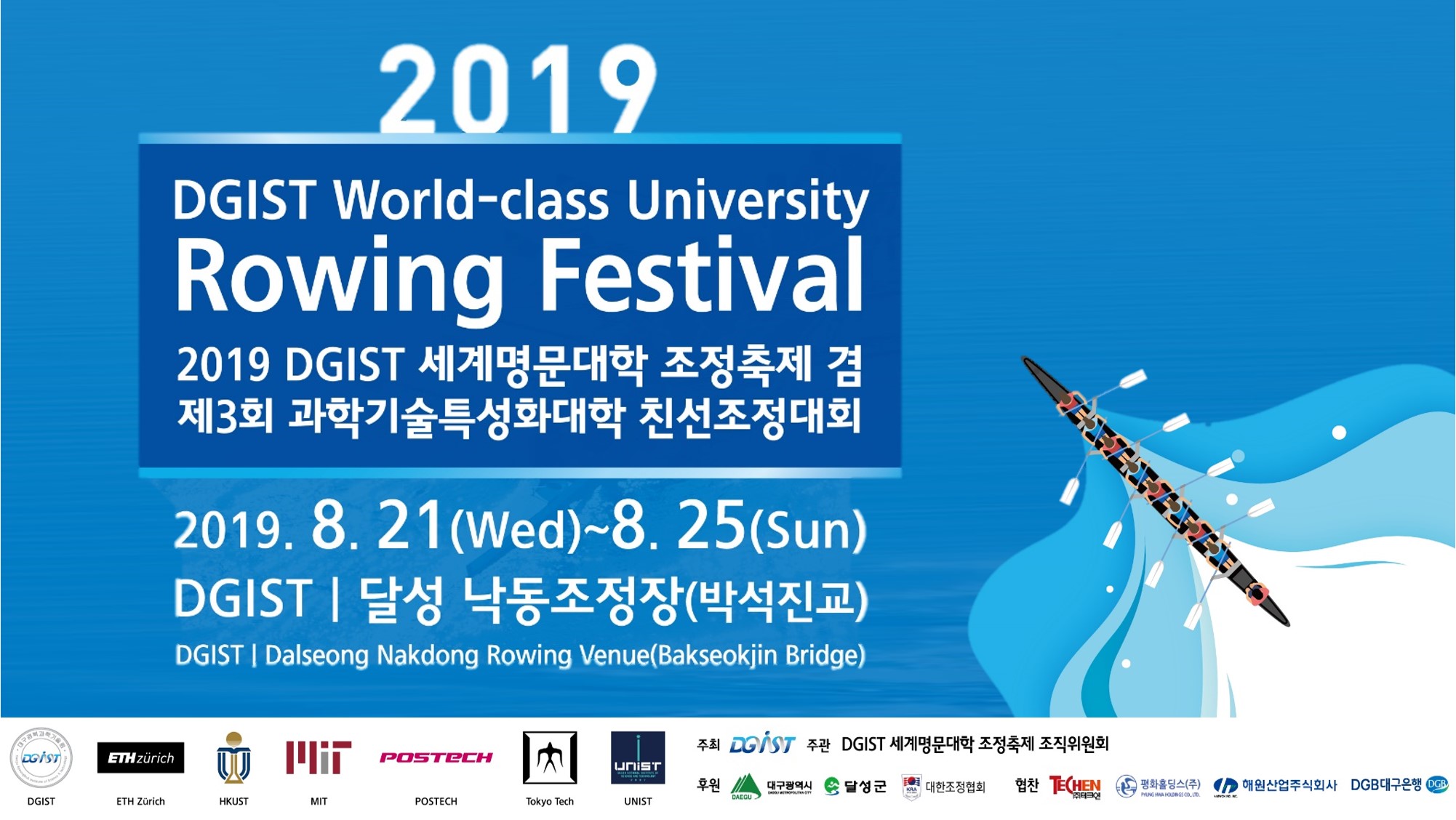 For 5 days from Wednesday, August 21 to Sunday, August 25, DGIST (President Young Kuk) is to hold the ‘DGIST World-class University Rowing Festival 2019 and the 3rd Rowing Festival for Science and Technology Institutes’ where top Korean and foreign science and technology university students gather for cultural and sports exchanges.

Celebrating its 5th year, the DGIST World-class University Rowing Festival 2019 will be held in Nakdong River rowing stadium of Dalseong-gun (near Bakseokjingyo Bridge), DGIST, and the Dalseong-gun area. Around 100 students from 7 universities in 5 countries will participate, including DGIST, POSTECH, and UNIST from South Korea, MIT of the United States, ETH-Zürich of Switzerland, the Hong Kong University of Science and Technology (HKUST), and Tokyo Institute of Technology from Japan.

This festival offers various cultural exchange events including the rowing competition, such as sightseeing of cultural and historical sites in Dalseong-gun and Daegu, Korean traditional culture experience, company visits, etc. which foreign students can enjoy. There is much more to see in this festival than before because it will also have a friendly rowing competition match with POSTECH and UNIST.

On Friday, August 23, 300 cheering teams from middle school students in Dalseong-gun (Yuga, Posan, and Hyeonpoong Middle School) will give enthusiastic cheering support, along with various events including the congratulatory performance by Posan Wind Orchestra from Posan Middle School and DGIST cheering squad D-ONE. All matches will be broadcasted live for the audience to watch them through a multimedia screen.

President Young Kuk of DGIST said “We believe this rowing festival will be a much more meaningful event as both World-class University Rowing Festival 2019 and the 3rd Rowing Festival for Science and Technology Institutes are held at the same time. We look forward for young intellects of the top global universities who have gathered in the same place to enjoy the rowing matches but also become true global leaders through the rowing festival with cultural and academic exchanges.”

Meanwhile, DGIST World-class University Rowing Festival 2019 is supported by Daegu Metropolitan City, Dalseong-gun, and Korean Rowing Association, and is sponsored by TechEn Co., Ltd., Pyung Hwa Holdings Co., Ltd, Haeweon P&C Co., Ltd., and Daegu Bank. There will also be volunteers from related organizations of Dalseong-gu. Inquiries can be made to the organizing committee of the rowing festival at 053-785-1183.