Prof. Seung-Tae Hong successfully developed NaV2(PO4)3, a cathode material
A Ground-Breaking landmark for accelerating the development and commercialization of CIBs. 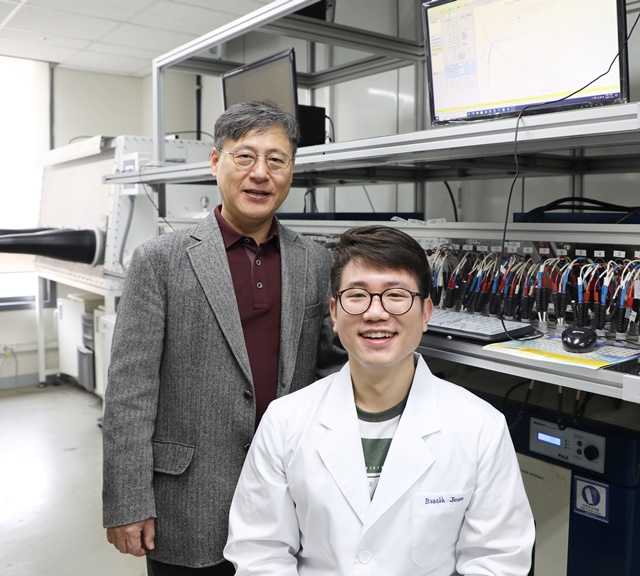 A research team led by Prof. Seung-Tae Hong announced that his team has developed NaV2(PO4)3, a cathode material for a Calcium-ion battery (CIB), which has been receiving great attention as a next-generation rechargeable battery. It is expected that the research will contribute to the further commercialization of CIBs, which exhibit more excellent capacities and performances than existing Lithium-ion batteries (LIBs).

An LIB is a representative rechargeable battery, which has been applied in various fields including mobile devices and electric vehicles. However, the energy density of existing LIBs has almost reached its limit due to the increasing demand for rechargeable batteries with more significant performances such as higher energy density. Moreover, limited regions of Li and Cobalt (Co) reserves, which are used as core materials for LIBs, have led to an increase in the price of the batteries.

Recently, a rechargeable battery applying Ca-ions has been actively analyzed as a candidate for replacing LIBs in research. For rechargeable batteries, charging and discharging occurs when ions and electrons move simultaneously between the anode and the cathode. The capacity and voltage of a secondary battery are determined based on the number of moving electrons and the properties of the cathode material. On the one hand, an ion in Li moves with an electron. On the other hand, Ca is a divalent cation in which an ion can move with two electrons. Thus, CIBs can theoretically have capacities that are twice greater than those of LIBs, as well as higher energy density than those of LIBs. CIBs are also cost-effective for that they include Ca, which is an abundant element found in the Earth.

However, CIBs have the disadvantage of electrode material deformation in terms of their structure due to the greater size and higher oxidation number of Ca-ions than those of Li-ions. For such reason, a cathode material must be enhanced for facilitation of stable management of operating voltage in CIBs. The cathode material is the main medium in the processes of insertion-deinsertion. It receives ions and electrons during the discharging process and transfers them to the anode during the charging process. This cathode material also determines the operating voltage of electrons.

Regarding the characteristics, the research team led by Prof. Hong developed NaV2(PO4)3, a NASICON-type cathode material that exhibits high structural stability due to the properties of Ca-ions. They analyzed the structure of NaV2(PO4)3 as well as the insertion-deinsertion mechanisms based on X-ray powder diffraction. Accordingly, they identified a change in the structure of the cathode material during insertion-deinsertion of Ca-ions and also verified that high capacities and operating voltage of CIBs can be achieved through the application of the developed cathode material.

Prof. Hong said “The research team developed the cathode material for CIBs, which facilitated reversible insertion of Ca-ions, and also identified the operating mechanism for the first time.” He further added that “The operating principle of the proposed cathode material will be a landmark achievement in the development of other cathode materials for CIBs with higher energy density.”

The research was carried out as part of the Samsung Future Technology Promotion project executed by the Samsung Science & Technology Foundation (SSTF). Boosik Jeon, a Ph.D. student and Doctor Jongwook Heo participated as co-first authors in this research. It was published in the online journal of Chemistry of Materials, an international journal in the field of material chemistry, on September 23, 2020.