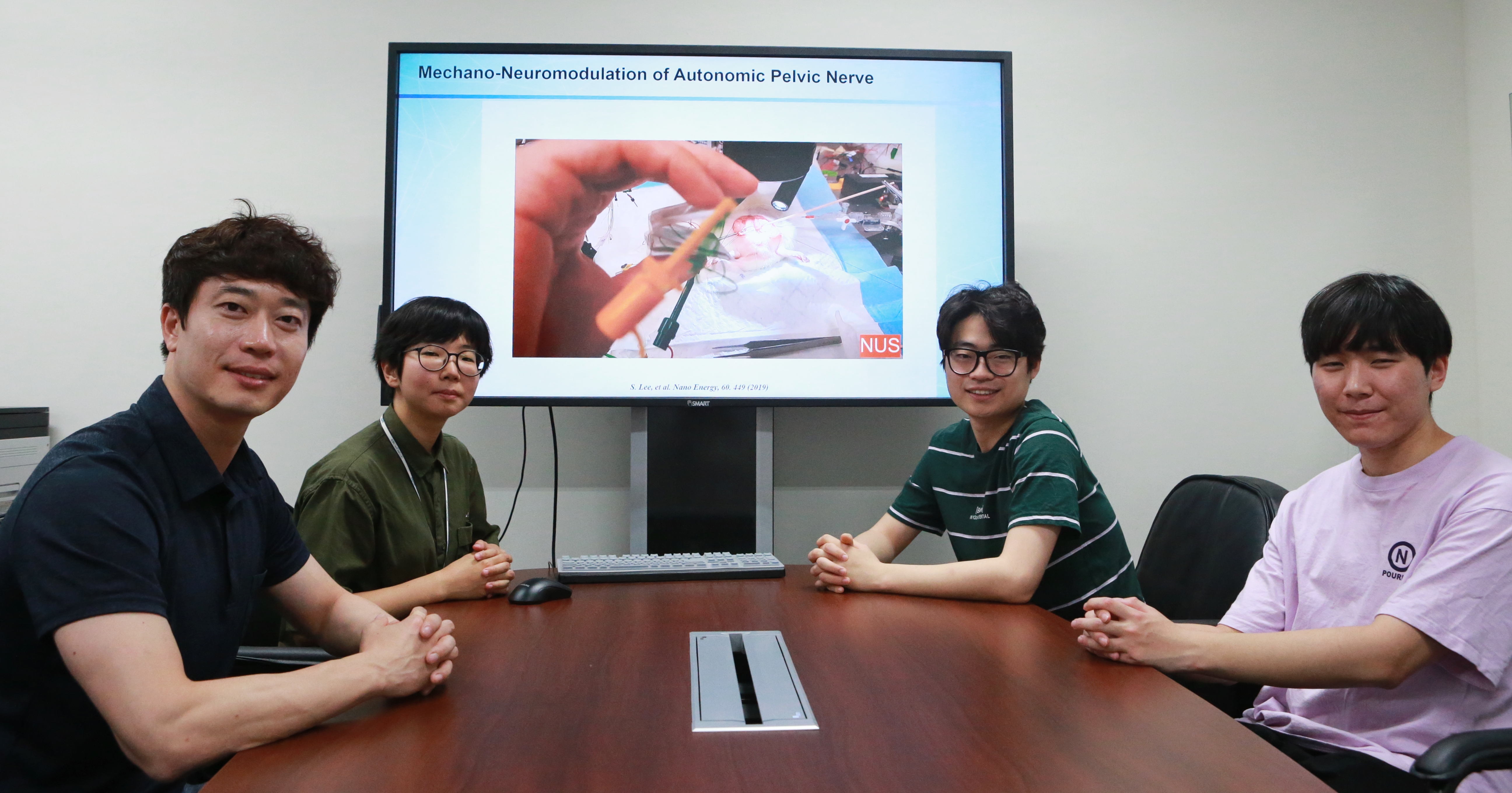 DGIST has developed a novel neuromodulation technology that integrates peripheral neural interfaces with a triboelectric nanogenerator that converts human mechanical energy into triboelectric energy for peripheral nerve stimulation. This technology is expected to have a positive influence on developing implantable neurostimulator near future.

Professor Sanghoon Lee’s team in the Robotics Engineering Department at DGIST (President Young Kuk) and a research team at the National University of Singapore (NUS) have developed a new concept of mechano-neuromodulation interface that stimulates peripheral nerves without batteries using triboelectric energy converted from human mechanical energy. This research demonstrated the occurrence of urination in rodents by stimulating a bladder pelvic nerve, and is expected to be applied for the treatment of neurogenic bladder.

Neurogenic bladder is a neurological disorder in which problems with the nervous system affect the bladder and urination. Overactive bladder, which is one of Neurogenic bladder, could be treated by stimulating a sacral nerve using an implantable neurostimulator which was developed to treat urinary incontinence. But this could not solve patients’ psychological and financial burdens due to regular surgery for the replacement of batteries as well as due to side effects in the body caused by rigid devices.

As an alternative solution for the treatment of underactive bladder, studies in stimulating a bladder pelvic nerve, which is directly involved in bladder functions, were conducted, however, there are many challenges due to the small size of the nerve and its location deeply inside the body. Professor Sanghoon Lee’s team developed flexible neural clip interfaces for the pelvic nerve, and combined with a triboelectric neurostimulator, which collects and converts mechanical energy generated from the body into triboelectric energy for neural stimulation, successfully developing battery-less neuromodulation interface to induce the urination of bladder.

The neural clip interface developed by Professor Sanghoon Lee’s team is very flexible and can be stably implanted on a very small bladder pelvic nerve in rodents, which reduces the risks of complications. This is in contrast to the existing neurostimulator which had high-rigidity1 and was vulnerable to complications by causing an unnecessary neural stimulation. Also, the triboelectric neurostimulator would be implanted in the body and convert mechanical energy, generated from the movement of muscle or organ, into electricity to be used as an energy source for neuromodulation near future.

Professor Sanghoon Lee in the Department of Robotics Engineering said that “Applying triboelectric energy into a neural stimulation experiment was the beginning of our research. The technology of modulating a bladder pelvic nerve, which is a part of autonomic nervous system, with triboelectric stimulation shows unlimited application potential for developing a battery-less implantable neurostimulator.

This joint research by DGIST Professor Sanghoon Lee’s team in the Department of Robotics Engineering and the National University of Singapore was supported by the National Research Foundation of Korea. Its result was published on June edition of ‘Nano Energy,’ a renowned chemistry journal.

1 Rigidity: A degree of material resistance against elasticity during elastic deformation