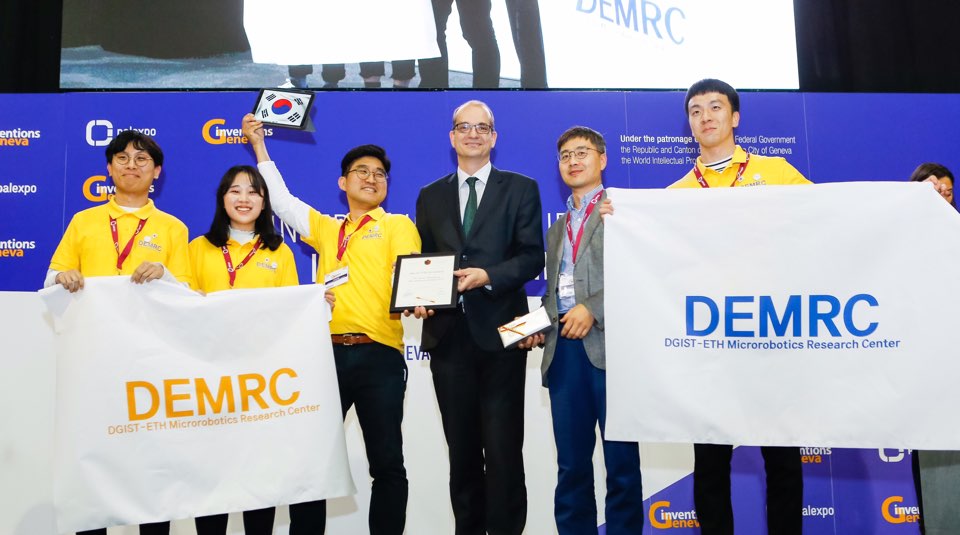 (Members of DGIST-ETH Micro Robot Research Center who won awards in 2019 47th International Exhibition of Inventions Geneva are taking a photo with the Special Award of Geneva State Government.)

The ‘surgical bed integrating magnetic control and video system’ especially drew the attention of local media by receiving both the Gold Prize and the Special Award of the Geneva State Government. Professor Choi’s team enhanced the controllability of micro medical robot by installing a magnetic control system and devised live broadcasting of a micro robot’s surgery video through x-ray.

Professor Choi said “We are very happy to gain worldwide recognition on our team’s performance through this exhibition and hope that these award become an important starting point for technology transfer and commercialization in Korea and abroad.”

DGIST-ETH Micro Robot Research Center (DEMRC) was established in 2013 to carry out joint research on micro medical robots between DGIST and ETH Zurich. It has been conducting research with the support of key industrial technology development project from the Korea Evaluation Institute of Industrial Technology since 2015.